The Hard Taco song for August is called, "Wrap the Babe in Damask." I hope you like it, even if the subject material (trading your infant to a River Witch in exchange for a bountiful harvest) feels a bit old hat.

My Nissan Murano is over 10 years old now. It's still comfortable and reliable, and the tape deck still works like a champ. Plus, it gets 16 miles a gallon. Think your car can do better? Maybe, but 16 m.p.g. is still pretty amazing. If I put my car in neutral, a high school crew team might be able to push it 100 feet on a flat surface before needing to hit the showers. But one little gallon of gasoline can carry this 4000-pound object 16 miles in any direction. That's enough to drive my whole family to downtown Ann Arbor and back two times, and still have enough gas leftover to blow up your car that gets better mileage.

The maintenance costs have been rising every year, though. To defray some of these expenses costs, I was hoping to cover the car with ads, like a NASCAR vehicle. 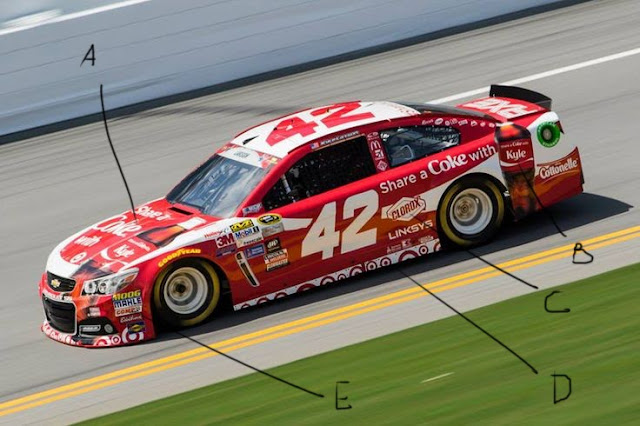 If you look closely at this picture, you will see familiar logos like Coca-Cola, Target, Sunoco, Clorox, 3M, Mobil, Cottonelle, McDonald's, Goodyear, and a dozen others I haven't heard of. One of them is a company that makes lubricant for ball bearings, and I've never heard of them because I am smart enough to realize that ball bearings are plenty damn slippery without lubrication.  That's like making banana peel lubricant.

So if you're that unknown company, what do you hope to get in return for the thousands of dollars you budgeted to put a sticker under one headlight of a high performance stock car? (See location E above.)

As you know, your company is not the only NASCAR patron that went for the lowest price point. Your logo is the size of an instant oatmeal packet and it's a tiny shareholder in that busy little advertising flotilla by the front wheel well. The average person in the crowd is about 30 rows back, but some of them have binoculars, and your logo is really distinctive. Oh wait, now the car is moving at 190 MILES PER HOUR. This is starting to look like maybe it wasn't the greatest investment.

Oh, and one more little detail. The driver's side of the car, the side with your logo on it, always faces the inside of the track. So, everything I wrote in the last two paragraphs doesn't matter, because the people in the stands will NEVER be able to see your logo.

Anyway, the idea of plastering vehicles with promotional materials was pioneered by the Wright Brothers. The picture below was distributed to potential advertisers after the first flight, and within a few days, every inch of the famed biplane was caked in corporate logos and slogans. 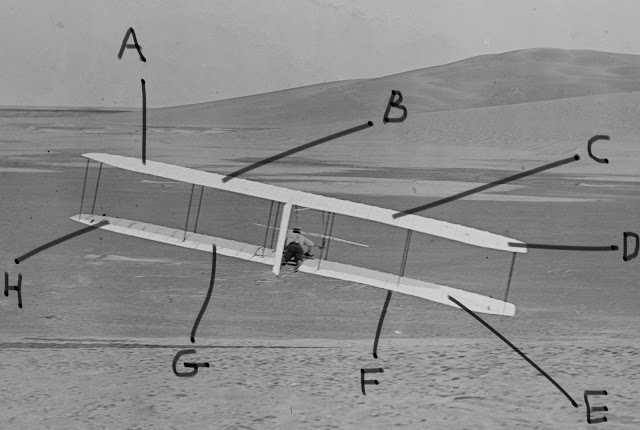 B) Philip Morris ("We would like to remind you that smoking is permitted on the entire aircraft, including the lavatories.")

C) James Dewar's Vacuum Flask ("For when you want absolutely nothing inside your flask.")

H) Eli Whitney Inc. ("I misunderstood the call for advertisements, and instead of providing a logo, I made a fully functioning cotton gin to glue to the wing of the plane. My bad.)

* After 1904, this was replaced with "Tesla: Fasten your seatbelt... we are experiencing unexpected SERB-ulence!"


With warmest regards,
Zach
Posted by Hard Taco at 12:15 AM No comments: