Staring Straight At the Moon

The Hard Taco song for December is called, "The Heart Is Bound."

Today, as I flip to the last page of my 2019 Alpaca-themed wall calendar, I reflect on the last year.  I had lots of happy moments with my family, felt productive at work more often than not, made some music, and spent many memorable hours looking at precious alpaca photos on my wall calendar.

But there were opportunities that got away from me. In January, there was a Super Blood Wolf Moon Eclipse, and in July there was a total solar eclipse. In both cases, I forgot to look up.

My New Year's resolution is to recommit myself to viewing rare astronomical events. Let's take a look at what deep space has for us during the next 12 alpaca pictures!

January 10, 2020
The first Full Moon of the year.  And yet, the Moon keeps putting food in its mouth. The moon should listen to its body when it is full, commit to mindful eating, and put its fork down between bites. Soon people will comment on how waning it is, and it will achieve that perfect crescent shape in no time.

March 9, 2020
Supermoon. Nobody suspects that that this is actually the same astronomical body as the clumsy, mild-mannered moon with nerdy glasses.

July 5, 2020
Penumbral lunar eclipse. This is a partial eclipse, where the Earth's shadow covers a tiny sliver of the Moon, giving the impression that the Moon has a rounded dent.

October 31, 2020
Blue moon. This just means a full moon that happens twice in a calendar month. Since the days that we call October have no astronomical significance, this designation is artificial. It's like a sportscaster saying, 'That is the most rushing yards by a quarterback... on Thursday Night Football!"

November 30, 2020
Another penumbral lunar eclipse. This is mostly relevant because of Art Van Furniture's "Second Penumbral Lunar Eclipse of the Year Sale." No money down and no interest until Mars transits Saturn.

September 8, 2040
Holy Shit Eclipse (The Sun is between the Earth and the Moon. This seems concerning... I'm going to recheck my source.)

July 28, 2061
Halley's Comet returns. You will be able to see it with the naked eye but will need a telescope to see the frozen remains of Mark Twain.

July 15, 2067
Mercury occults Neptune, meaning it blocks it completely. Which is crap, because nobody can see Neptune anyway, especially not 91-year-olds like me.

February 18, 2177
The First Plutonian Anniversary. Pluto will have completed one orbit around the Sun since the day it was discovered. I'm probably going to forget, so I'm setting my alarm. 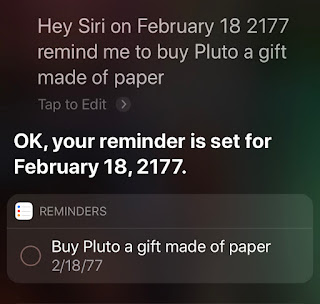