Down with Fruit Bruises

Happy New Year, Sweetie. The first Hard Taco song for 2009, "Never Shake a Baby," is not only a great song, but a great idea for your next New Year's resolution. I'm not going to beat around the bush: 2009 is not going to be a ridiculously great year, whether you stick to this resolution or not.
There is one resolution I hope we all keep, however. We must resolve to buy more American fruit. This is crucial because, for one, many people aren't buying enough American fruit. Tomorrow, when the supermarkets re-open, you can go scope out the produce aisle and see for yourself. The problem is fruit bruises. If there is one infallible truth about groceries, it is that nobody (Nobody) wants bruised fruit.

At this point, you are undoubtedly printing out Mapquest directions to the nearest megaphone rental so you can scream "I agree!" Relax... I can already hear you. If you feel the need to prove it, take this simple quiz about fruit bruise attitudes:

You accidentally pick up a bosc pear with an unsightly brown cavity. You immediately:
A) Avert your eyes. Remember that you were supposed to pick up some yogurt. Announce this aloud to everyone within 20 feet of you, and make it sound urgent. Run like hell.
B) Hold your arms over the broccoli, praying that one of those mist-machines on a timer will activate and cleanse the wicked bruise ichor from your fingers. Afterwards, run like hell.
C) Put the bruised pear in a bag. Use your iPhone to look up the mailing address of that insufferable prick you went to high school with. Think about mailing him the blemished pear as retribution for being so unforgivably loathsome. Realize that this would require you to handle the pear. Proceed, instead, to take a picture of the fruit bruise with your iPhone and email it to him. Run like hell.

Now that we are, as they say, tethered to the same psychological zip-line, let's talk through a solution to the problem by examining the facts.
Fact: Nobody (Nobody) would intentionally purchase bruised fruit.
Fact: Every piece of fruit has a little sticker on it. This is called a fruit sticker.
Fact: The location of a fruit sticker on a given piece of fruit is entirely arbitrary.
Fact: If a piece of fruit is 95% healthy and 5% bruised, a sticker placed over a healthy area will drop the percentage of visibly delicious fruit to 90%. The likelihood that the fruit will be sold will plummet!

Now imagine, if it pleases you, a device* that identifies the largest bruise on each piece of fruit and puts the sticker directly over it. Now the fruit from our example looks 95% healthy, 0% bruised, and 5% mysterious!  Folks, we just increased the chance of that fruit being sold (using math.)
When people buy more American fruit, you guessed it: everyone wins. Suddenly, grocery stores will find themselves with a budget surplus, which they can spend on more fruit stickers. Soon, every fruit bruise in America will be concealed. With no more smashed, rotted fruit to camouflage, grocers will be forced to meet burgeoning demands by pulling handfuls of whatever out of the dumpster and covering it with a monolayer of fruit stickers.
At this point, the buyers are going to catch on, right? People won't actually purchase wood shavings and amputated ankles just because they are encapsulated in small adhesive ovals... WILL THEY?
I can't predict that, but I'll be prepared for any contingency, because my plan has a PHASE 2. Instead of smothering a decayed piece of produce* with unattractive identification labels, we use stickers that are stylin'. I'm talking about stickers everybody (Everybody) wants. Of course, the licensing fees for branded images like Princess Jasmine or the ReMax balloon would be prohibitive, but there is one sticker that is highly desirable and absolutely free… 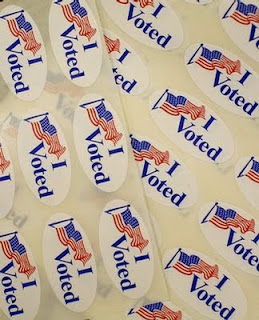 I will not lie to you about this: I don’t know anybody (Anybody) who can resist this sticker. I recently stood in line for over an hour just to get one. Now imagine a banana wrapped in fifteen "I Voted" stickers, each with a little American flag on it. Would you buy that banana? Would you campaign on that banana's behalf? Would you stand behind that banana, even if it turns out to be rotten? I believe you would.
I believe you will.

* or migrant worker
Posted by Hard Taco at 8:51 PM No comments: