The Hard Taco song for March is called, "Down at the Berl." The crawfish boil, or "berl," is the classic Louisiana seafood gala. Cajuns cannot pronounce the sound oi, which is why so few of them are Jewish grandmothers. (Er! My daughter could have married that lerer, but her new berfriend is an unemplered ger! Maybe I should person his sermilk?)

The Turquoise Badge of Top Sellerness
Unless you have applied 20 cumulative miles of packing tape to cardboard, you are one of the millions of eBay users who can only sigh wistfully at the unattainable turquoise shooting star.

I've made an eBay bid or two in my time, and I'm happy to say I still have 100% positive feedback. I can't really claim to be proud of this, though, because everyone has 100% positive feedback. There is a bylaw on eBay's Terms and Conditions page that states that real feedback is only permitted when it is quietly sandwiched between screamed compliments.


Seriously, dear friends. The A with seven plus signs after it used to mean something. The only institution with worse grade inflation than eBay is karate class. (See prior rant.)

That's why I renounced online auctioning about 10 years ago. My last serious eBay purchase took place just before my wedding. It is traditional for a groom to give his groomsmen a modest token of gratitude at the rehearsal dinner... either a monogrammed flask or any product made by Victorinox. Rather than saddle my besties with yet another swarm of Swiss Army Ants, I decided to go with autographed pictures of their favorite celebs.
My third groomsman is/was a Harrison Ford fan. He likes to dress like Indiana Jones, insomuch as he always wears his belts diagonally instead of horizontally.

I went on eBay and got him this signed 8"x10" glossy, but soon after it arrived, I started having second thoughts about giving it to him. Indy isn't even looking at the camera. Without seeing his face, how could I be sure it was really Harrison Ford? 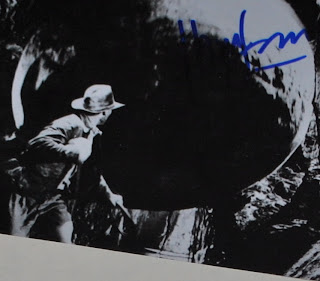 I couldn't fathom why Harrison Ford would sign a fake picture of himself, but it didn't seem right to give a tainted piece of memorabilia to my fourth best groomsman. (Sorry for the demotion, Jeff, but those diagonal belts look really stupid. Tell Brian he's #3 now.) In the end, I found him a nice autographed picture of a Star Wars extra from a "top seller" with 110% positive feedback. The Raiders of the Lost Ark photo stagnated on my desk, and over many months it was sucked into the undertow of deep storage documents.

Then, a couple weeks ago, I was cleaning out a file cabinet and found it. Here's the dilemma... I don't want to keep the photo, but it's too valuable to throw away, and I'm certainly not going to sell it on eBay. I realize just now that the only way for this picture to fulfill its destiny is for us to recruit one more groomsman (or groomsmaid), and give it to him/her!

I would like you to apply to be that groomsman/groomsmaid. To be eligible, all you have to do is write a toast for our wedding. The only details you need are that the bride's name is Lauren and it is March 2001. (Also, everyone is excited because one of the actors from "The Usual Suspects" is hanging out in the hotel lobby, but you don't have to use that.) Feel free to make your toast sappy, funny, or embarrassing... it's your call, Groomsperson!

Send the text of your toast to znlondon@hotmail.com by the end of March, and you may be chosen as the winner. The prize package includes the Harrison Ford autograph, a doctored picture of you with the rest of the bridal party, and a personalized thank you note on original wedding stationery!

You've always been there for me and I just want to say I love you, man/woman,
Zach
Posted by Hard Taco at 6:40 AM No comments: