The Drawer. Chapter 1: The Glove

This month's Hard Taco song, "I'm Too Tired," is our attempt at a Summer camp cheer. It has shouting, patterns, imaginary words, more shouting, the names of countries, and some shouting.

In September 1993, I moved out of my childhood home in Milwaukee, leaving behind a bedroom full of era-defining bric-a-brac. My favorite Bloom County comic strip was taped to the wall next to my favorite poster of a mediocre rock album that had great cover art. On the desk, there was a stack of Taco Bell ashtrays that I lifted from the Port Washington location the day before they banned smoking at all Taco Bells.  On the shelf were three shrink-wrapped VHS copies of "An American Tail: Fievel Goes West."

Like any lukewarm-blooded teenager, my pop culture tastes were my brand, and my childhood bedroom would be forever saddled with the 1993 version of that brand while I moved on with my life in other cities.

Everything came off the walls within a few years. My parents weren't secretive or malicious about it. In fact, they gave me every opportunity to liberate my fuzzy Led Zeppelin blacklight posters, but Led Zeppelin was not part of my 1996 brand, and neither was fuzziness, so down they went. New wallpaper went up, the desk was cleared off, and now my old bedroom was a perfectly presentable guest room. But I was okay with it, because the contents of my closet and desk drawers remained safe, temporarily, from trespass.

In 2001, Lauren and I married and bought a starter house on the most delightfully-named street in Ann Arbor, Roon the Ben.  It was the moment my parents had been waiting for. The seal had been broken; I could no longer cite lack of space as justification for leaving my crap at their house.

From then on, every visit from Rick and Roberta was punctuated with another box of knick-knacks. My Transformers. My comic book collection. My Dungeons and Dragons modules. The Commodore 64 and 300 floppy disks of pirated games. Each of these articles perfectly embodied the pack-rat's paradox: too valuable to throw away and too useless to ever take out of deep storage.

One year we hosted a family Chanukah party and my parents showed up with about ten bags of beautifully wrapped presents, none of which had cards or labels.  They were up for grabs, and any kid or grandkid could open them, with the caveat that whoever unwrapped a gift had to keep it or dispose of it. I loved this idea, in theory, but when the wrapping paper starting coming off I realized that most of these 'gifts' were the remaining contents of my closet... a cylindrical Quaker Oats box full of marbles, some cassingles, and my collection of M.U.S.C.L.E. figures.

They even had the gall to regift my precious fingerless glove! That same glove had warmed my right hand (or at least my palm) throughout high school. It always made me look tough-as-shit, even when I was sad, like in this yearbook photo. 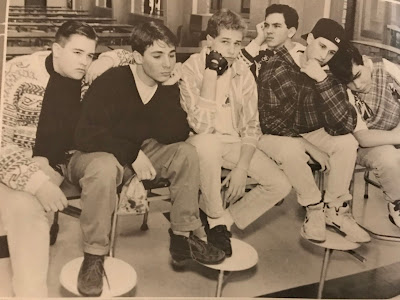 While my nephews were squabbling over the marble collection, I quickly snatched up the glove. Even with two of the knuckle spikes missing, it still made me feel pumped for all manner of hard-boiled badassery.


As pleased as I was to reclaim my forgotten battle gauntlet, I was indignant that anyone would want to relocate my worthless memorabilia. It was as if a federally-protected wildlife refuge had been rezoned for oil drilling. Pieces of my former self were being peeled away relentlessly, and it made me feel like the Giving Tree. (You know, from that book where the tree is minding its own business and some dude keeps trying to throw away its collection of Taco Bell ashtrays.)

With the closet cleared out, there was only one unspoiled sanctuary left in my childhood bedroom, a drawer in the built-in desk. This drawer had enjoyed longstanding protected status, perhaps by virtue of being filled with an unorganized jumble of personal letters, creative writings, and doodles.

Every few years, when passing through town, I would open the drawer and run my hands through the heap of letters, churning them like I was playing in a leaf pile or sifting through a mountain of gold coins. Oddly, I never had the faintest urge to read any of them. It was just comforting to know that they were there, and that the impenetrable drawer would grant them perennial asylum.

Somewhere along the way, I wrote a little acoustic song called, "The Only Serious Thing." It opens with the line, "There is a drawer of letters, poems, and plays / That somehow survived a dozen moving days." That was in 2004, and I was already sentimental about this silly old drawer.

Lauren and I were in Milwaukee a few weeks ago, and my parents confirmed the rumor that they are thinking about downsizing. Perhaps they'll get a lakeside condo. Or maybe they'll move down to a retirement community in Florida.

(Just kidding: Rick and Roberta would rather be torn apart by scarab beetles than live in Florida. It's just not their brand.)

While no move is imminent, they have become fixated on purging non-essentials. The drawer that had been invulnerable for 26 years was now in the crosshairs.

And that, dear chums, is where I will leave you for now. Next month, we will unpack this drawer together and you can help me decide what is worth keeping, and what should be tossed out with the fuzzy Led Zeppelin posters.