The Tourist's Secret Window to the Magic Kingdom

The premier Hard Taco song for 2013 is called, "September Wedding." This song has words, but strangely, they are not rhyming words. Writing a song without rhyming lyrics is like setting a teacup on a saucer without an opulent paper doily. It's a little risky, because the guests are more likely to storm out of the house and say, "Why, I never!" But if the tea is good enough, patrons may view the absence of the doily as charmingly droll.

Last Fall, we took a family trip to Orlando, and spent a couple days at "the happiest place on earth." That's my nickname for The National Vietnam War Museum. I knew the kids would love it, but the lines were terrible! Just to leave at the end of the day, we had to contend with this:

Johnny Depp movie: Alice in Wonderland
Attraction: The Mad Tea Party
Learn from my oversight of judgment... if you must go on this spinning tea cup ride, do so before drinking Peter Pan's Beer Flight.

Johnny Depp movie:  Sleepy Hollow
Attraction: Sleepy Hollow Refreshments
This is in the part of the park formerly called Liberty Square, which will soon be renamed The Libertine Square. 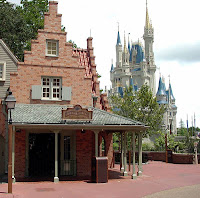 Johnny Depp movie: From Hell
Attraction: It's a Small World
There must be some kind of arcane invocation that will send them back.

Johnny Depp movie: Sweeney Todd: The Demon Barber of Fleet Street
Attraction: Mr. Todd's Wild Ride
There is also the Harmony Barber Shop in the Main Street U.S.A. area. Apparently, they actually cut hair there, but that doesn't explain why the building has a smoke stack.

Johnny Depp movie:  Once Upon a Time in Mexico
Attraction: Cinderella's Castle
My kids waited in line to have this picture taken with Seen-dare-AY-yah.


A large area of Fantasyland was blocked off when we were there, because they were building new rides and exhibits which should open later this year. Here are my predictions!

Johnny Depp movie: 21 Jumpstreet
Attraction: One Hundred and One Jumpstreets