Where there is Yin, there is always Yang. I learned that from someone who hadn't really mastered English yet, but I think he meant that life is a balance of opposing forces. Where there is earnestness, there must also be silliness. Last month's Hard Taco song was all Yin... it was uncharacteristically earnest. And so, to maintain equilibrium, the song for May, "Sightings," has a more Yang then I know what to do with.

Speaking of more Yang than I know what to do with, my parents have a giant cobblestone phallus in their yard.

My high school friend Jeremy named it Uganda. He had read that in the 1970s, "Discussing Uganda" had been a euphemism for sex. We found this phrase delightfully anachronistic. This was the 1990s, after all, and the English language had at least five other euphemisms for sex by then, all of which were variations of  "___-ing the horizontal ___."

We agreed to call it Uganda as sort of a retro homage to a time when people were less creative with their euphemisms.

The actual origin and purpose of this structure has been lost to time. My parents' house is over 100 years old, and as far as we can tell, Uganda was there since the beginning. Most neighborhood historians agree that it was built by the early settlers of suburban Milwaukee as a part of World War I era fertility ritual. It even has a hole on top, about three inches in diameter. My parents' hypothesize that this hole held a flagpole.

That's a nice theory. But you and I know that if Sigmund Freud could come back from the dead, he would flick cigar ashes at my parents and tell them to stop being so naive. This was never a flagpole, and the original homeowners weren't patriots. 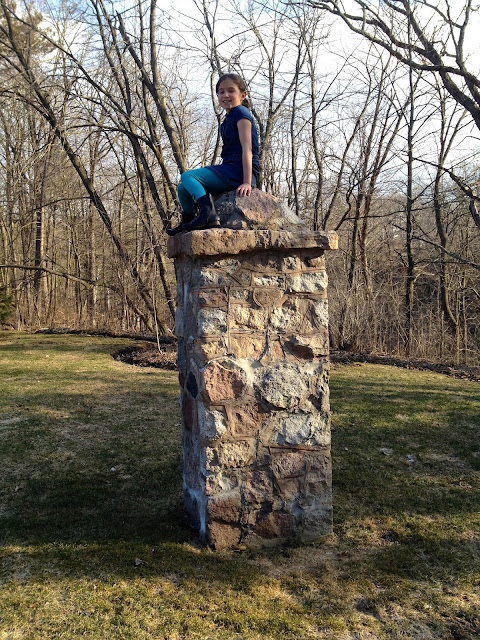 Sitting in someone's lawn for 100 years can take its toll on even the heartiest of ceremonial phallic symbols. The cement holding Uganda together has started to wear down, and some of the stones have chipped.

A few months ago, my dad hired a trusted stonemason to give us an estimate for repairs. The news was not good. There was water damage that ran deep. He estimated that it would probably be cheaper to replace the whole thing than to repair it.

I really wish I could have been there for this conversation. He was volunteering to replace it. Replace it with what, exactly? How do you go about building something from scratch when neither you nor the customer knows what it is?

Okay, let's say we ask him to replicate the original as much as possible, and we don't spring for any upgrades (although I can imagine some great ones!) Even if we rebuild it stone for stone and change nothing, we are going to run into all kinds of trouble with zoning restrictions and safety ordinances. Quite simply, Uganda is fine, but a new giant lawncock would have to built to code, and approved by the neighborhood association.

So we've got some things to think about. In the meantime, it's May Day people, so get out there, and dance around your own Maypole!