HAI to the Victors


Did you know that my family is part of a citizen diplomacy network that creates and strengthens partnerships between international communities? Yeah, that's us, because we live in Ann Arbor, so we've got this: 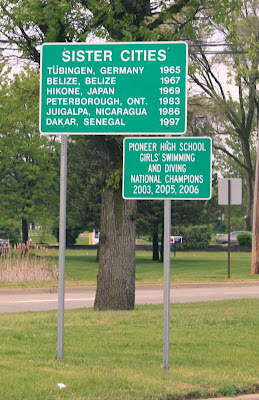 This month, let us lay a wreath of delicately arranged respect at the feet of one of our beloved sister cities: Hikone, Japan.

People of Hikone, I looked at your municipal website and it is BREATHTAKING. I'm so so so sorry that you got stuck with Ann Arbor as your Sister City. There's a chance that you'll dig the Naked Mile and the Hash Bash, but if you're expecting us to go toe-to-toe with you on lakes and castles, our cultural exchange is sure to disappoint.

I only hope that I can mitigate that disappointment by contributing something to our inter-metropolitan communion.  People of Hikone, I offer you this month's Hard Taco song, "Sushi Fun Song," and dedicate it to your rich history and rich natural surroundings that I keep reading about on your website. "Sushi Fun Song" is essentially indistinguishable from your own traditional music, except that it is many times better, because it is not gong-based. On behalf of my mayor (who is indistinguishable from your own), we hope that this familiar sonic landscape will prime you for more adventurous cultural intercourse in the years to come.

People of Ann Arbor, when you're done sprinting through the Diag, I invite you to put some clothes on for God's sake, or at least cover up with a towel or something, and meet your Sister City.

Introduction:
Hikone, an historical city in the prefecture of Shiga, is where ancient tradition meets early 20th century tradition. The same kimono-clad, umbrella-bearing women that shuffle around the city by day may later be found at a singles bar, sporting English language T-shirts with provocative messages such as, "Do not small parts in mouth avoid eating" or, "Measurable which designated prudently alive please."

Culture:
The people of Hikone take pride in being among the most apologetic in Japan. Often, the greeting yee watashia moto ko wishinay is repeated twice by each party upon meeting. It means, “No, I repent more. No, I repent more.” A popular bunraku puppet theater production features dozens of elaborately crafted puppets trying to shout this sentence over each other for four and a half hours.

Useful Phrases, by setting:
At a restaurant:

At a business meeting:

At a tourist center: