Welcome to the Hobby

The Hard Taco song for June is called, "Billion Lines of Code."

We haven't gone completely paperless at work, but the need to preserve physical documents is less each year. In early 2018, I made the decision to do get rid of the oversized and underused file cabinet that came with my office and replace it with this freshwater aquarium. 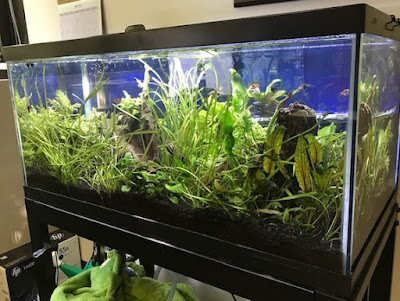 This action has augmented my social situation in the workplace. Almost daily, a colleague passes my office door, waves, and asks, "How are the fish?" I've learned that if I keep my answer to a single word, the officemate is more likely to ask me again the next day. I value regular interpersonal connections, so I usually just reply, "Great!"

It's not much of a conversation, but before I had the aquarium, nobody ever asked me how my hanging file folders were.

Anyway, as a new pet owner, I hope to interrupt your Me-Time and show you adorable pictures of my fish. You owe me this courtesy for all the times you've made me look at pictures of your kids. (Note that this does not apply to friends who are infertile, or fertile people who are not my friends.)

My fish are like children in so many ways... they do better with lots of space, they swallow anything they can fit in their mouth, and I usually put the dead ones in the conference room wastebasket so don't have to walk all the way to the bathroom.

The first fish I introduced into the tank was the harlequin rasbora, shown below. A great fish for beginners, the harlequin rasbora doesn't give a rat's ass about water parameters. Mine is perfectly happy as long as the pH is under 14, the water is in a liquid state, and I feed her either sometimes or never. The harlequin rasbora can live comfortably in an aquarium filled with vodka, bleach, Visine, or any other clear liquid.

The rummy nose tetra was the 2018 winner of "Best Fish Named After a Card Game." Runners-up included the canasta guppy, the contract bridge loach, the crazy eights pleco, and the go fish fish. 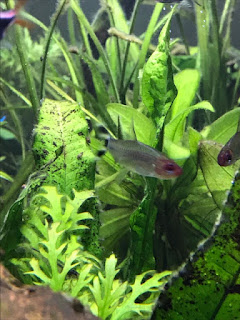 
You might think that all squirrels look alike, or all Canadians, but at least squirrels and Canadians can tell themselves apart from other squirrels and Canadians. Not so with dwarf gouramis. Mine probably saw the fish food canister on the desk next to the aquarium, and thought, "Well crap, that's ME outside of the tank," and stopped breathing. If I ever get another gourami, I'll cover up the label with a picture of a Justin Trudeau, and it won't matter if the gourami thinks it's actually Ryan Gosling.

I love my invertebrates, too! They may not have a spine, but these jumbo Amano shrimps are the backbone of my cleanup crew. They love nibbling on unsightly algae, decaying plants, and other detritus. If I let them out of the tank the morning after a party, they'll wipe down the countertops and put all the empties in the recycling bin. They're that good.

My other favorite invertebrate is the cherry red shrimp. This little guy is so adorable, I can hardly stand it. He's always so busy! And here's the cutest part... do you know what the rows of little shrimp feet are called? Swimmerets. Isn't that just darling?

Unfortunately, there's also a neon tetra in my tank. This haughty son-of-a-bitch acts like he's God's gift to the freshwater habitat because he's named after some noble gas. I seriously cannot deal with this pretentious gill-bag sashaying back and forth all day like he's cock-of-the-walk. Ugh. Look at his self-satisfied little caudal fins and his big stupid eye and tell me you don't want to overfeed this insufferable little schmuck.