The Hard Taco song for July is called, "Brady." It's about this guy, whose owner was savvy enough to beat the rest of high society to commissioning a Hard Taco song. If you have designs on appointing a splendid Court Composer, I am now available.


Placid Teenage Hormones
McDonald's once had a promotion that anyone who bought a sandwich would become eligible to purchase An American Tail: Fievel Goes West on VHS for $3. I was 16 years old, and although I had not seen this movie or its predecessor, An American Tail, I found myself spending down my allowance savings so I could have four copies.

I was in a phase, I suppose, and it probably had to do with hormones. Not the ordinary teenage hormones often portrayed as raging, but the lesser-known glandular secretions that drive young men to purchase impractical and obscure things as a means of self-expression. For Chanukah, I gave my parents and sister the autobiographies of different Star Trek actors, even though none of us were Trek-heads. I tried to explain that the memoir of a still-closeted George Takei was the campiest and most bizarre thing in the bookstore. Thanks to hormones, my developing teenage brain concluded that this randomness made it relevant. So relevant, that asking for a gift receipt would have been sacrilege. Why couldn't my family appreciate that?


These same hormones left me indifferent to mediocre movies, but furiously obsessed with REALLY bad ones. That was why I had no choice but to buy four copies of Fievel Goes West. 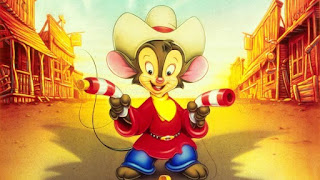 (Of less interest is that by changing just a couple more letters, one could make an archaic religious propaganda brochure... Fie, evil! God's Best.)

I've seen Fievel Goes West over 30 times. Hands down, it is my favorite movie. I transcribed the whole script and memorized every line. I scoured eBay for Fievel-themed trading cards. I wrote fan fiction. I spent hours at the library looking up old newspaper reviews of the movie, photocopied them and compiled them into a three ring binder. I even wrote a Rocky Horror-eque script for audience participation, in which there is a great running gag about Fievel's father having no neck. Here are some examples:

Papa: Fievel's birthday is coming. And we don't even have enough money (FOR A NECK!!!) for presents.

Papa: Ha! Our little Fievel is not so little no more!
(BUT YOUR NECK IS!!!)

I recommend joining me for a screening. It's one of the few socially acceptable forums for screaming obscenities at immigrants.

Amblin Entertainment made one serious mistake that doomed Fievel to humdrum box office mojo. The movie appeared in theaters on November 22, 1991, the exact same day that Disney released Beauty and the Beast. It's hard to fault the holiday moviegoers for choosing Princess Belle over Fievel Mousekewitz.