I used to wonder if my life would have been easier if I had committed to writing one dirty limerick a month rather than one song a month. Probably not. Undoubtedly, life would have been more glamorous, but not easier. There are only so many stories one can tell about a man from Nantucket, and the pressure to come up with new variations that don't sound derivative would be overwhelming. I'll stick with songs for now.  The new one for this month is called, "Why Won't You Cry?"

Here's a brain teaser. Fill in the blank:

"The Sisterhood of the Traveling ____"

The correct answer is that there isn't a correct answer. It's a trick question. The sentence makes no sense, because the blank is in the wrong spot. It should be The Sister ____hood of the Traveling, and the answer is, "City Increases the Likeli."

Sorry. If it was easy, it wouldn't be a brain teaser.

Visiting a Sister City is like borrowing your best friend's shorts. (Yes, I said shorts, not pants. Why do you keep bringing up pants?) Ann Arbor has a half dozen, and each sister is more twisted than the last. I, for one, intend to sightsee the living hell out of all of them. 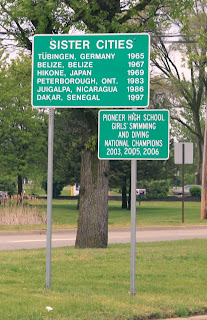 In recent years, I provided exhaustive stereotype-free travel guides for Hikone, Dakar, and Tübingen. Today, we stand parallel to the world map and crane our necks backwards to examine our Sister in the far North: Peterborough, Ontario.

English is the first language of most residents, but their proximity to Quebec gives them ample opportunities to speak with hilarious French accents, much like the city's namesake, handsome screen actor Peter Sellers.

Known as the "Electric City," Peterborough was the first municipality in Ontario to install wall outlets in every residential home and commercial igloo. The coal-burning electric plants have led to an alarming rash of lung cancer, with a prevalence comparable to that of the city's namesake, handsome television news anchor Peter Jennings.


Peterborough, Ontario - Quick Facts and Guesstimates
Population (February 2016): 80,000
Population (February 2017): Unknown millions, when 49% of the population of the United States fulfills their promise to move to Canada after someone they hate is elected president.
Most common occupations, age under 60: Lumberjack, fur trader, being a flying squirrel
Most common occupation, age over 60: Not being drafted in the Vietnam War
Namesake of City: Handsome singer-songwriter Peter Frampton
Most popular TV show: The Biggest Hoser
What to do if attacked by a grizzly bear: Act like a fish. Then it will hit your head against a rock to stun you before mauling you.
Most popular hate group: The Neo-NotZeds
Legendary hero: Some medieval knight who body-checked a dragon into the walls of a castle.
Other Popular Folk Tales: There are plenty of good ones. When it comes to Canadian mythos, this Digest is not my first beaver rodeo.
Motto: Always carry a camera, in case you need to prove you saw a Sasquatch secretly paying his respects at the grave of a deceased Mountie.
Namesake of City: "Pedro" from Napoleon Dynamite, who is muy guapo
Traditional prom corsage: A bouquet of Molson bottles taped to moose antlers
Driving time to Ann Arbor: 5h 23m by car, 20h 13m by dogsled, 132h 31m by Zamboni (because you have to go back and forth three times to cover the entire road.)
Favorite Judy Blume book: "Tales of a Grade Four Nothing."